Those are powerful and intimidating words. As a foodie, I like to “geek out” as my friend Kate says, meaning I like to talk about food almost as much as I like cooking and eating it. So naturally acquaintances eventually ask, “are you a good cook?”

I am being modest. And I am not. There’s a perception that if you say you’re a good cook that you’ve got it all figured out. You know all the techniques, the skills, the varieties of cuisine. And while I feel pretty comfortable in the kitchen, it’s easy to find people that show how much you have to learn.

My friend Michael Housewright is such a person. I wish I knew how to describe Michael. He’s a travel guide/writer/photographer/cook/sommelier/etc. You can find him at Housewrighter.com. The truth is Michael is someone who is in love with the world around him. Not just its contents but its pace. He slows down and turns daily ritual into a sensory and mindful experience. So when Michael turns his attention to a meal, each ingredient is approached with passion and forethought, seemingly the result of years of searching for the perfect ingredient. The food is elevated beyond the recipe to become a sensual experience.

In light of such skill (and there are many beyond his skill and passion even) how can mere mortals identify as good cooks?

I made paella for the second time last night (if I may digress for a moment). My neighbors Jonathan and Rebecca will tell you it was perfectly edible. And yet the leftovers found their way into the trash bin. I wasn’t really ashamed of it, but it’s not something you would expect from a “good cook.” At least my failures are edible more often than not these days.

It is with this pretext that I have been reading the Tartine Bread cookbook. I’ve been on a Tartine kick lately. Friends told me of lines around the block for this bread. I saw the cookbook on a friend’s coffee table and decided to get it. Then I made a small pilgrimage to SF to get some country bread. When I crushed the warm bread with my hands to tear off a piece, my ears remarked at the light crunch. My teeth eagerly plunged into the chewy texture. And I was caught off guard at the amount of flavor without being off-putting or sour. The entire experience was enveloping. Involuntarily I let out a moan. Sensual indeed. 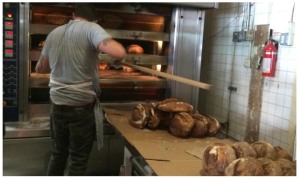 The owner, Chad Robertson, spent the better part of a decade apprenticing with bread bakers around the world, and years more perfecting the perfect loaf before opening Tartine, all this AFTER completing culinary school.  Think of that, a person who was already so good at cooking that they went to culinary school to make it a career, then spent 10 years perfecting a dish that has 3 ingredients that peasants have made for thousands of years.

I wonder how many failures he had over the years that made him one step closer? How many times he served it to a friend who loved it while he was thinking “just you wait until I perfect it.”

That’s just one single dish from one single type of cuisine. There is no such thing as mastery of cooking.

The thing is, we are not good cooks or bad cooks. We are just cooks. We seek to create amazing food. We are, in the modern slang, foodies. As an aside, I find that “foodie” has sort of become the opposite of the word “hipster” in that even the most obvious hipsters won’t admit to being hipsters while almost anyone who would prefer gruyere on a grilled cheese sandwich is now called a foodie.

But in the end, it’s not about whether you can be the next Iron Chef, but about whether you actively seek that next level of cooking, where the ingredients and preparation go beyond the recipe to become a sensual experience. It’s when you close your eyes and forget your surroundings and moan.

One thought on “I am a good cook”